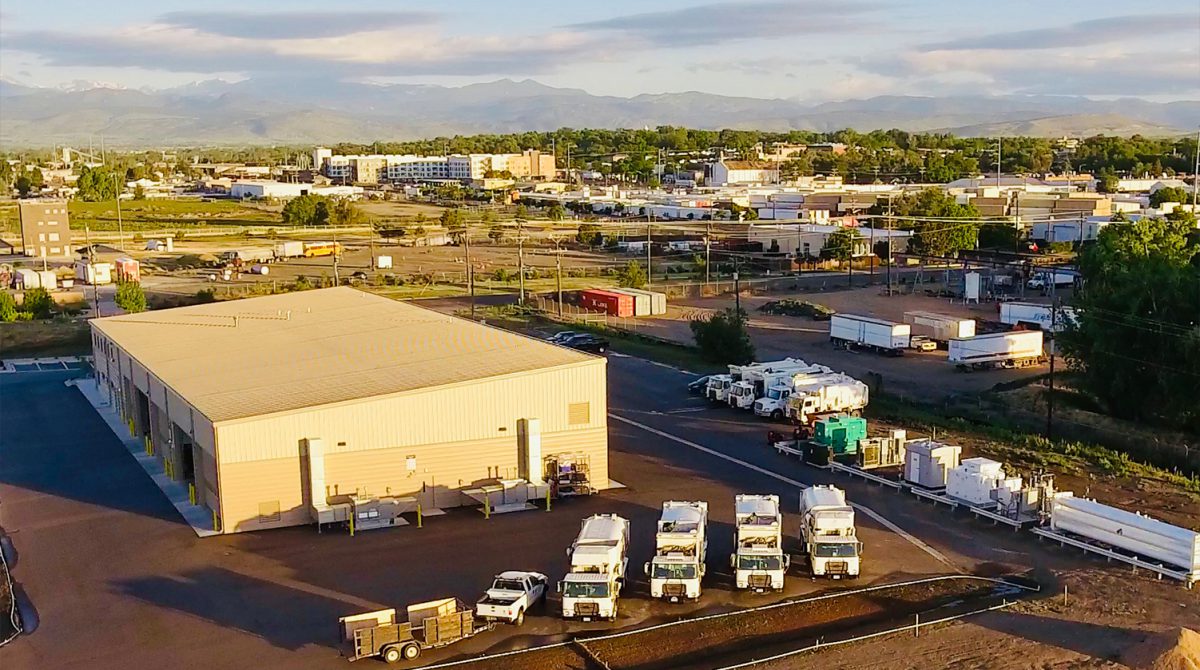 CHICAGO – The City of Longmont has been awarded the Water Environment Federation’s (WEF) 2021 WEF Project Excellence Award, a national distinction granted to projects executed with excellence and infrastructural innovation in the water sector.

The City’s Public Works and Natural Resources department and its consultants CGRS Inc. and Carollo Engineers won for the Biogas Treatment and Renewable Natural Gas (RNG) Fueling Station project, a groundbreaking resource recovery and reuse effort that treats and converts biogas produced at the City’s Wastewater Treatment Plant (WWTP) into RNG for vehicle fuel. This project is the first of its kind along the Colorado Front Range.

Accompanied by Carollo’s Becky Luna, John Gage, a senior civil engineer with the City, accepted the award at the WEF’s Technical Exhibition and Conference, better known as WEFTEC. Held on Tuesday, October 19, the awards celebration was attended by water quality professionals from across the country.

“It was an honor to receive this award on behalf of the City,” said Gage, who served as project manager. “This project is a prime example of how municipalities can take a holistic view of their resources and services to develop innovative solutions.”
The Project Excellence Award recognizes the project for its ability to address common and complex issues within the water sector and deliver original, sustainable, and valued solutions that not only meet the owner agency’s expectations in terms of quality, cost, and schedule but also improve the well-being of local communities.

Biogas is an energy-rich by-product of a wastewater treatment plant’s anaerobic digestion process that, without proper infrastructure or a reuse plan that captures its benefits, utilities often waste. However, a proper treatment system can covert this valuable resource into RNG, which can then be compressed into compressed natural gas (CNG) that serves as a clean, local, and reliable source of low-cost renewable fuel.

To achieve this, the Biogas Treatment and RNG Fueling Station project is comprised of a new biogas-upgrading system at the WWTP, a new indoor vehicle-fueling station and administration building, and a pipeline to transport the RNG between the WWTP and fueling site. The produced RNG currently fuels the City’s Waste Services fleet whose diesel trucks were recently replaced with 11 quiet, odorless vehicles that run on CNG.
The project and the fleet replacement supported each department and division’s needs, allowing for robust collaboration that continues to benefit individual operations, the City, and its communities as a whole.

“To incorporate both RNG and CNG systems into one successful project, it was critical that we understood both the WWTP and Waste Services fleet’s operations as well as the City’s end goals,” said Cory Kahler, CGRS’s water and wastewater operations manager and CNG expert. “The lessons we learned are ones we will draw on for all future RNG/CNG projects.”

Since the biogas-upgrading system and vehicle-fueling station came online in March 2020, the City has offset nearly 100,000 gallons of diesel fuel per year, not only saving up to $300,000 annually in fuel costs but also reducing greenhouse gas emissions by roughly 1,000 metric tons of carbon dioxide equivalents per year—the equivalent of removing 200 cars from the road. And, because RNG can also be sold as valuable renewable identification numbers (RINs) or “credits” through the U.S. Environmental Protection Agency’s Renewable Fuel Standard program, the City anticipates earning a revenue of close to $400,000 by the end of 2021.

Today, the biogas-upgrading system is operated almost continuously, making sustainable use of the WWTP’s biogas. The City plans to complete the transition of the remaining 10 Waste Services trucks to RNG by 2024.

“The success of this project is due in large part to the WWTP and Waste Services and Fleet divisions’ tremendous interdepartmental coordination,” said Luna, the project’s design manager. “Working together, the team developed a win-win solution that reduces greenhouse gas emissions in the community and provides a source of revenue to the City. Carollo is extremely proud to be a part of this award-winning project.”
The 2021 WEF Project Excellence Award was also awarded to the Metro Wastewater Reclamation District for the Nuisance Struvite and Dewaterability Improvements project and the City of Portsmouth for their Peirce Island Wastewater Treatment Facility Upgrade project.